↓
Our Females
Click on the dogs name to go to its own page.
“True Bordeaux Type,” It’s just not about a Typey Head
At Old School we feel the body is just as important!! 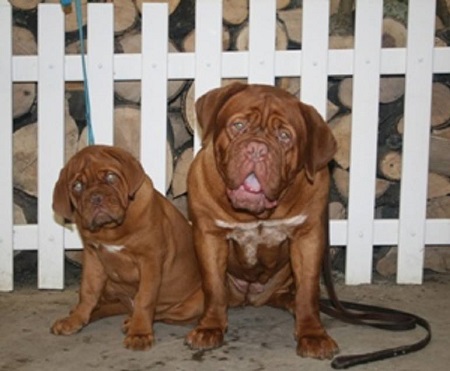 “Zola at 4 months and Aaliyah at 15 months”
Here at Old School Bordeaux it’s not just about the males! 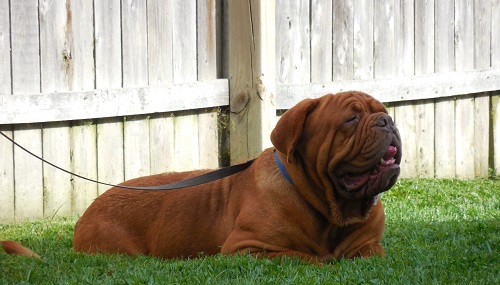 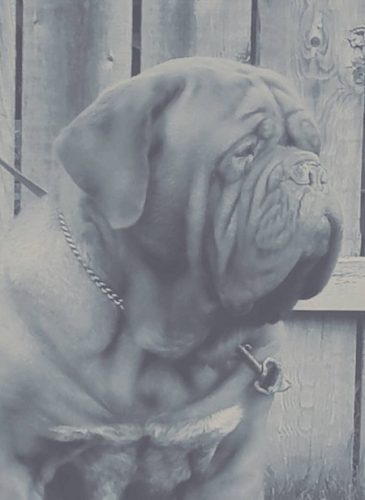 Aaliyah is another example of an “Old School Foundation Female”
The breed standard for a female Bordeaux is 45kg which is equal to 99.2lbs.  All of our females weigh between 115-135lbs., which is a nice size for a female and since our females are low to the ground the way the breed is suppose to be that is just fine with us here at Old School Bordeaux.  It really amazes me to see a supposed 130lb. female that I have seen in person be much smaller than one of my 115lb. female.  It just goes to show with this breed of dog, owners tend to exaggerate a lot.   Now they could be much bigger, but since Macaroni and Cheese is not a part of our females’ diet here at Old School, they have a more muscular and athletic build to them.  After all this is a working breed of dog not a sloppy breed of dog. 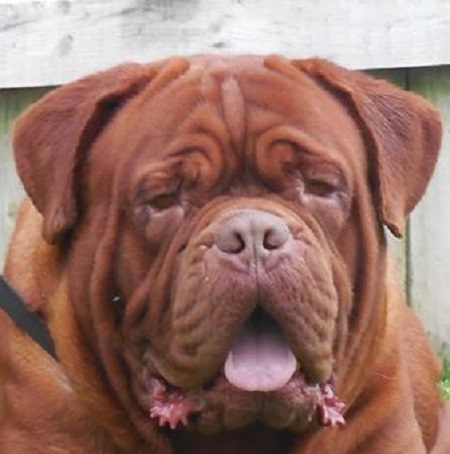 “Old School’s Benecia“
*Retired*
This sweet little girl is one of the pups we decided to keep back from our Flame and Armani June 12th 2011 litter. There were so many qualities about her that we loved, that we just had to keep her. There is no doubt that she is her father’s daughter, and we are sincerely excited about the head type and bone size that she is displaying already at such a young age. Currently at the start of her 2 years, she is weighing in at 112lbs. and has 37 inch chest. Her depth of chest is even greater than her mothers. She is 24.25 inches at the withers and has a 25 inch head. Like her father Armani, she has one of the better Bordeaux facial expressions out there and we can’t wait to see how she will blossom once she reaches adulthood.
Birthdate – 6/12/2011 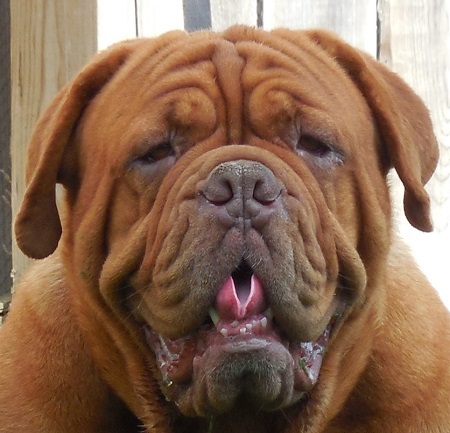 “Heavenly Dogue’s Nova“
We are so glad to have this female a part of our program and are very happy in her development so far. By taking after her father Heavenly’s Isaiah in appearance, she brings a strong Toezz look in which we wanted to add to our program.  Not only does she have great headtype but huge bone, as well as a wide deep chest. Standing at 23 inches at the withers, she is built low to the ground like her mom. Her mom is a daughter of Payk z’ Orisku and contains strong bodied males in her pedigree like Cetj and Asso. Though compact in her built, we expect Nova to weigh at least 120 lbs. as an adult.  With the breed becoming so tall here in America, Nova’s characteristics should help us stay true to the standard when she begins producing offspring in Fall 2014 with Peerless Kazuya at Old School Bordeaux.
Birtdate – 01/03/013

“Fame Comes Only To Aaliyah”

At only 2 years old Aaliyah is a lean 125 pound female with the frame to carry another 7-10 pounds of solid mass easily. She stands 24.25 inches at the withers and has huge bone along with a massive chest. She is the perfect combination of both her father and mother. Her head type is very masculine in look like her father and she displays a straight front and strong chest that comes from her mother Gr. Ch. Agramer Bordog Simone who is the daughter of Int. Ch. Hyron Delle Querce Rosse. Aaliyah brings another style of extreme type through her Honneur genetics. We feel she is a true foundation female with superior genetics that will come to the forefront in her potential future offspring. 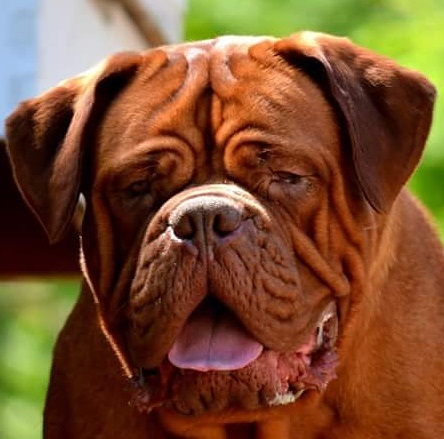 “Ch. Old School’s Envy Of Us All“
*Co-Owned with Theresa Fry of Montgomery Bordeaux* 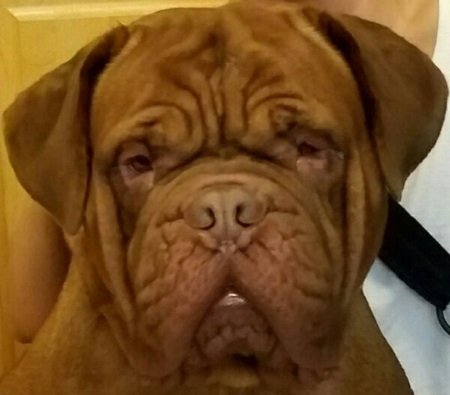 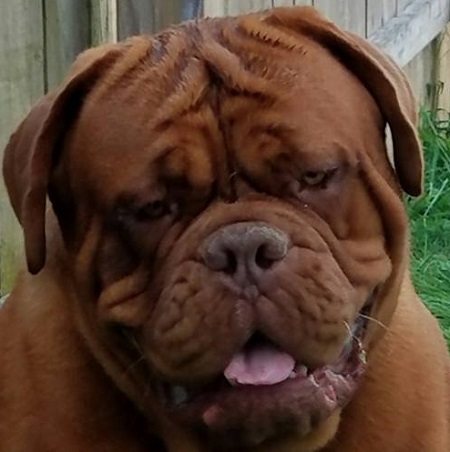 “One Dugo’s Zola“
We waited for several years for the breeding that produced Zola to happen, so when she was available we jumped at the opportunity to add this special female with a world class pedigree to our program. We feel that her mother Zee Zee z Orisku had the best Toezz head type out of any female in the U.S. along with having excellent size to her for a female. Though Zola displays more of her father’s phenotype, we are hoping she produces more of a Toezz head type with her offspring since she will be bred to our triple Toezz Stud Kazuya. 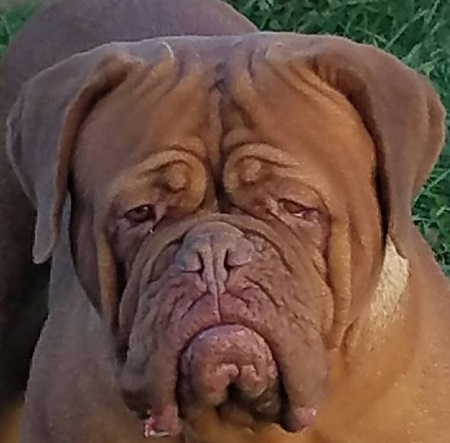 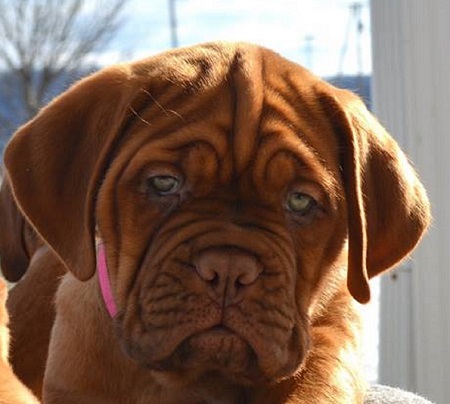 Destiny is our triple Toezz female who is a pick female out of Ch. Scarlett Wrinkles Leonidas. She is a carbon copy of her father with her head type. Like her father, she will be a late bloomer in her development. We consider her to be the “dark horse” of our females. We are expecting her to produce pups that are bigger and more extreme in type than she is. The number one reason we chose her is because of her rare Felson / El Siscar blood combination along with her genes to potentially produce pups with good rear angulation. 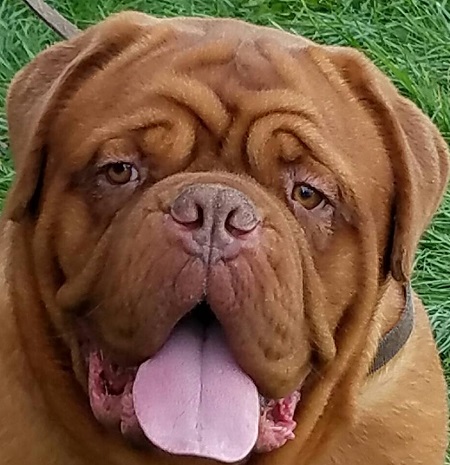 “One Dugo’s Walla“
One Dugo’s Walla is the tightest linebred female we have here at Old School Bordeaux. We like the head type of Heimer’s Honneur de Monde so much but to be able to add Ipam blood to the program was a very beneficial as well. She does not look like a Honneur descendent but a bigger version of her mother Queta z Orisku. Like her father Ch. Tacker z Orisku, she is huge boned with a massive chest. Out of all the females here at Old School Bordeaux, Rhea already has the biggest bone at just 11 months and by the time she is 18 months she will have the largest head as well. We are expecting her head size to reach at least 25.25 inches in diameter by the time she has fully matured. 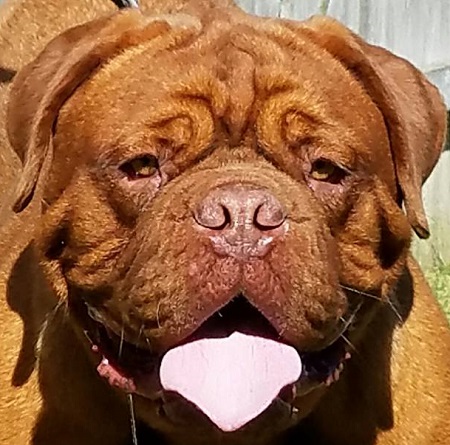 “One Dugo’s Scarlett“
This special female we call Kai has the most American Dogues in her pedigree out of all our females. She is our double Boogaloo granddaughter that is triple Viski and four times Sodium as well. She has the height of her grandmother Ch. Perfecta z Orisku but has a nice, strong, wide chest like her grandfather Boogaloo. Even though she has Toezz far back in her pedigree she is displaying his phenotype heavily in her head and expression. She has excellent movement and rear angulation but what we like most about Kai is her drive and athleticism. Her leaping ability is simply phenomenal and we are looking to duplicate this style of Dogue in our breeding program. We are very excited about the variety of pedigrees that will be combined with up and coming female in the future. 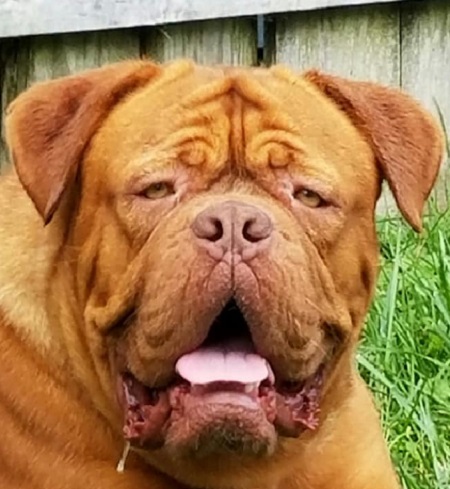 “Starwood’s Zelda de Old School“
Zelda is the daughter of our Croatian stud El Palermo and Kazuya’s half sister Audie. She is going be the tallest female in our program by far due to her father’s strong genes. She reminds us a lot of her aunt Ch. Agramer Bordog Dolly Parton in so many ways. We specifically chose to add this girl to our program because of her rare size and huge bone combination. Her head will develop later just as her father’s did once he became an adult. This is a late developing bloodline that is very rare here in this country. Zelda is going to bring a extremely tall and rangy style of Bordeaux with a great frame and athleticism. 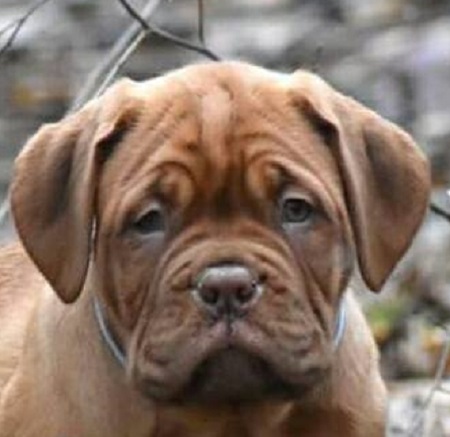 “Salty Dogue’s She’s All That“ 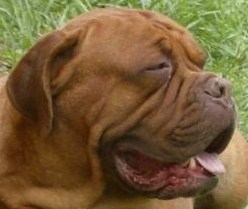 “Lewis’s Red Sandy“
*Retired*
Sandy is our first Bordeaux and a little taller than our other females. Her muzzle is wide and has the perfect stop to go along with her head. At times her mask looks like a taupe color which some people say makes her look more unique than our other females. While being our greatest protector she is by far our sweetest Bordeaux in personality. Her head is real typey and has a lot of thick wrinkles, and you can still definitely see that trapezoid shape to it. Sandy has the perfect height and build and weighs around 115 lbs. She is very athletic and runs very well for size too. At 24.5 inches at the withers and a 37.5 inch chest, she is definitely what we are trying to duplicate and enhance with her offspring she produces. Birthdate – 3/01/2006 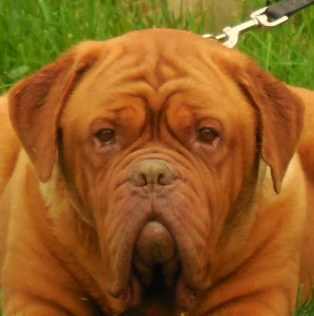 “Cleopatra Ann Madaras“
*Retired*
We like to thank Nate and Brianne Worley at Imperial Bordeaux for recommending we add this monster female to our program here at Old School Bordeaux. We also simply could not turn down the opportunity to own one of the largest Sinbad de Legeane granddaughter in America. Cleo has huge bone and a massive chest with outstanding depth and width. She also possesses a big head with excellent breed type, great chin, and nice wrinkle expression. Cleo is 24 inches at the withers and is at her best shape when we keep her weight at 120lbs. We are truly excited about her next breeding with Old School’s Braddock this Spring 2013. We feel he is one of the best up and coming males in the country and we are extremely excited about the possible litter Cleo and he can produce together.
Birthdate – 06/01/2007 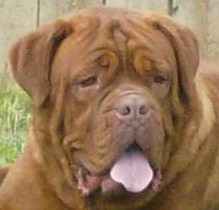 “Anderson’s Flame de Kokomo“
*Retired*
Flame is our dark red female who is the grand daughter of 2006 and 2008 DDBSA Nationals Best of Breed and AKC Champion Sinbad de Legeane. At a solid and stout 116lbs. and 23.5 inches at the withers she is our shortest female and by far our darkest Bordeaux also sporting a 24.5 inch head. She is similar to our male Vice in that she has nice width and is a stocky type of Bordeaux; with the great subtance she posesses and a 37 inch chest, she is built like a tank. Flame has nice bone for her size and has a very deep chest which is famous in the Temple Felson lines. Her short, wide muzzle goes perfectly with her typey head and has plenty of wrinkles to go with it. With her pedigree we believe she will improve our stock tremendously and are very much excited on the possibility of consistant good quality Bordeaux pups she and Armani will produce together!!! Bithdate – 6/01/2007 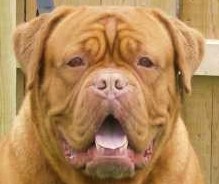 “Anderson’s Blaze de Kokomo“
*In Memorium*
Once again we’ve hit the jackpot here at Old School Bordeaux when we selected Blaze who also is a Sinbad de Legeane grandaughter to be a part of our program. She is displaying positive features you look for in a Bordeaux. Like her sister Flame, she posesses nice bone and a great chest which is 35.5 inches and set of broad shoulders to go along with her thick, muscular neck. She stands 24 inches at the withers, and with a 25 inch head, she already has the largest and typiest head out of all of our females with a short, wide muzzle to match. These dogs change so much from the time they are born, so when we had to make our pick while she was only two weeks old, we had to look for little things that would help us to make a choice we could feel confident in. At 2 years old she already weighs over 110 lbs. which is larger than what her sister Flame was at this age. When she is finished developing we believe she will end up being our most complete female.
Birthdate – 4/01/2008
Back to Home Page
↑