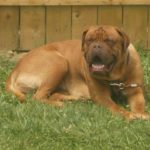 Like many large breeds, Hip Dysplasia and Elbow Dysplasia are health issues that can affect the Dogue de Bordeaux. Other health concerns include Demodectic Mange, Bloat, heart problems, and Skin disease. In addition, the Dogue de Bordeaux is a very fast growing dog — puppies can gain 2 to 4 pounds per week on average — and may experience Eosinophilic Panosteitis (Pano). Hypothyroidism is also a common condition in all giant breed dogs.

Hip & Elbow Dysplasia
Canine Hip Dysplasia afflicts millions of dogs each year and can result in debilitating orthopaedic disease of the hip. It is caused when the femoral head does not fit properly in the hip socket, causing instability of the joint. Over time, this malformation can cause degenerative joint disease which causes increased pain and immobility

Through selective breeding strategies, veterinarians and breeders are attempting to eliminate Canine Hip Dysplasia. All breeding dogs should be x-rayed and hip scored using the KC/BVA hip scoring scheme before mating

Panosteitis (Pano)
(Also known as “long bone disease,” “wandering lameness,” or “pano.”) Most commonly seen between the ages of five to 12 months. Pano is caused by excessive bone production on the long bones. Normally, a dog affected by this condition will grow out of the problem, but it is painful.

Diet is thought to be a contributing factor in the development of Pano. High protein puppy diets may make the puppy grow too fast and increase the chance of the pup experiencing Pano which is also sometimes described as “growing pains.” Pano can also show up in any leg and may come and go without warning. Puppies usually completely outgrow Pano by the age of 18 months and it rarely goes beyond two years.

Bloat
Gastric Dilatation Volvulus (GDV) is a condition caused by a twisting of the stomach and thus trapping the stomach contents and gases resulting in a rapid swelling of the abdomen accompanied by pain and eventual death if untreated. It is an emergency, requiring immediate veterinary action.

This condition is most often found in large, deep chested dog breeds. Anyone owning a deep chested breed, susceptible to Bloat should be prepared to handle the emergency procedures necessary, including having readily available the name and phone number of emergency clinics and/or after-hours Veterinarians.
Symptoms can be subtle. You should learn to recognize them:
• Continuous pacing and/or lying down in odd places
• Salivating, panting, whining
• Unable to get comfortable
• Acting agitated Unproductive vomiting or retching (may produce frothy foamy vomit in small quantities)
• Excessive drooling, usually accompanied by retching noises
• Swelling in abdominal area (may or may not be noticeable

If ANY combination of these symptoms is noticed, CALL YOUR VET and get the dog there as fast as possible.
Bloat is LIFE-THREATENING.

Hypothyroidism
Canine Hypothyroidism is the most commonly diagnosed hormonal disease found in dogs. The term hypothyroidism simply means the underproduction of thyroxin, the hormone produced by the thyroid gland.

The thyroid gland is located on the trachea (wind pipe) of the dog, just below the voice box. It exerts its influence on the dog’s body by producing and releasing thyroxin into the blood stream. This hormone, and thus, the thyroid gland itself, is very important in controlling growth and development and maintaining normal protein, carbohydrate and lipid metabolism of the dog.

Hypothyroidism usually occurs between the ages of two to six years. The most common sign is an increase in body weight. Lethargy and some form of skin disease (i.e., thin coat, loss of hair, dandruff, oily skin, increased scratching) are also common signs of Hypothyroidism.

Demodectic Mange
Caused by a microscopic mite known as Demodex Canis which all dogs raised normally by their mothers possess. These mites are transferred from mother to pup during the first few days of life. The mites are normal residents in dog skin; however, for some dogs, the mites proliferate and can cause serious skin disease.
Note 1: Demodectic Mange is not contagious and mites are not transmitted to humans or other dogs (except the mother dog to her pups).
(Sarcoptic Mange is a completely different disease.)

Back to Home Page
↑