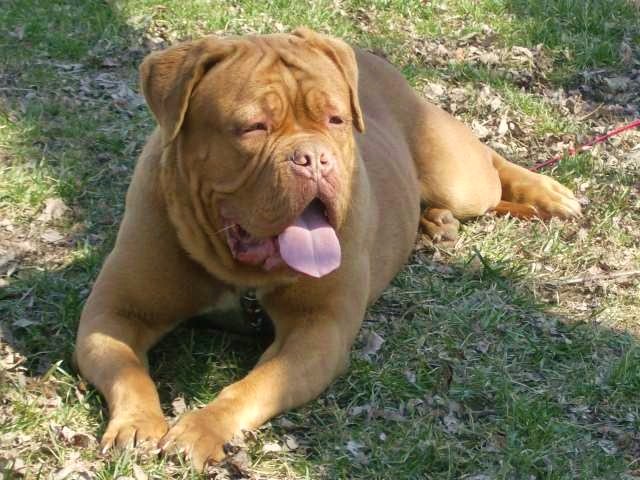 Dr. Raymond Triquet is quoted as saying: “It is often said that the common stem of all European Dogues was a big dog coming from the confines of India and China, more than 3000 years ago, and by stages would have gone from Thibet to Mesopotamia, there, where begins the history of men, then to Epire, small kingdom of ancient Molosse; then to Rome and from there to Gaule. He would have made this long journey by the side of conquerors, warriors, and merchants.  It is possible that this prestigious connections part true, but let us not forget the fact, maybe preponderant, that archeologists have found in the land that would become France, bones of dogs dating from prehistory, bones that were those of a Dogue.”

There are notions that the Dogue has ties to the Alano, an extinct dog of Spain, similar in many ways to the Bordeaux. It is said that this dog was brought to Europe by the Alans, an Oriental tribe.  It is also said the Bordeaux is related to the Greco-Roman mollosids used for war, as there was a breed similar to the Dogue de Bordeaux in Rome at the time of Julius Caesar’s reign.  This would make the Dogue a cousin to the Neapolitan Mastiff. Yet another theory suggests that the Dogue is a descendent of a breed which existed in France a long time ago.

In France, the Dogues were bred depending on the region and jobs they were required to do.  The general appearance was inconsistent, the Dogue had various colors and varieties of coat, they had scissors bites in some regions, undershot in others, but they all had a general type similar to today’s Dogues.

We do know the Dogue de Bordeaux was used as a guardian, a hunter, and a fighter.  They were trained to bait bulls, bears, and jaguars; hunt boars; heard cattle; and protect the homes, butchershops and vineyards of their masters. The Dogue de Bordeaux were prized as protectors and were often found in the home of the noble and wealthy of France.

During the French Revolution, many of the Dogues are thought to have perished with their wealthy masters during the uprising of the classes, but the Dogues of the common man must have thrived. These Dogues became the champions of the arena, and were powerful dogs bred to do their jobs and do them well.

It was in 1863 when the first reference of the Dogue can be found, at the first canine exhibition at the Jardin d’Acclimatation in Paris, France.  It was more of an inventory of breeds than a conformation event.  The winner was a bitch named Magentas, and the Dogue de Bordeaux was given the name of the capital of their region of origin.

There is not other known reference to the Dogue until the year 1883.  There was such diversity in the breed at this time, and much controversy over this. They had big heads and small heads, some were exceptionally large in body, while others very small. Some breeders preferred the scissors bite, others the undershot. The mask color was the subject of many debates and discussions. There were three styles of Dogue at this time, the Toulouse, the Paris, and the Bordeaux.  Our modern Dogue is a mixture of these different types, but is primarily Bordeaux.

The Toulouse was a Dogue that had almost every color in its coat, a fawnish tiger (a light brindle perhaps), with a longer body and smaller bones.  Dogues in Paris had a scissors bite, while others had a undershot of almost one inch.  Finally the breeders came together and decided upon the undershot, which is today’s standard.

In 1895 a few breeders tried to establish the Dogue in England, and also that year, John Proctor or Antwerp, who had judged the Dogue de Bordeaux,  published an account of his experiences with the “fighting dogs of the South of France” in the magazine, The Stock Keeper.

In 1896, Pierre Mengin put together a synthesis of the best Dogue de Bordeaux shown and know from 1863-1895.  He published Le Dogue de Bordeaux, that featured a description and characteristics true to the Dogue.  This effort, put forward by Mr. Brooke, Mr. Mengin, Dr. Wiart, and a group of authorities in France, was the first standard of the Dogue de Bordeaux.

In 1897, Henry de Bylants work, The Breeds of Dogs, introduced the breed standard to the world of dog breeders.  J. Kunstler, Professor of Comparative Anatomy of the Science Facility of Bordeaux, studied the Dogues in 1907 and in 1910 published A Critique Etude du Dogue de Bordeaux (A Critical Study of the Dogue de Bordeaux). During the 1960’s, Dr. Raymond Triquet headed the rebuilding of the breed, and in 1970, Dr. Triquet wrote the new standard for the Dogue de Bordeaux.  The standard has once again been updated, this time by Dr. Triquet and Mr. Tim Taylor.

The Dogue can also be credited to taking part in the breeding programs of two other mastiffs, the Argentine Dogo and the Tosa. Dr. Martinez, who bred “The Fighting Dogs of Cordoba” or the Argentine Dogo, used a menagerie of breeds to produce the Dogo, and the Bordeaux was used to increase the size of the head and accentuate the overall courage, strength and jaw strength. During the 1930’s, the Bordeaux were imported to Japan to cross with the Tosa (Fighting Dog of Japan). This increased the head size and the overall body size of the Tosa.

Prof Triquet notes the first dog recorded to be exported to the USA was Fidelle de Fenelon, to Merle Campbell in 1959. Fidelle was used in breeding Mastiffs, not Dogue de Bordeaux.

Recently, the son of Merle Cambell wrote to the DDBS with some interesting history to add on Fidelle:

“Franklin “Merle” Campbell Sr. was my father. Dad was probably the longest living breeder of Old English Mastiff’s at the time of his death in 1987. My mother Henrietta B. Campbell was also very much involved in the breeding and cared of Mastiff’s, both for their entire adult lives.

Dad brought the female bitch dogue in 1959 from France. There is not a Old English Mastiff in the world today that is NOT a descendant from this bitch. She was rather smallish by Old English Mastiff’s standards but well with in the the breed standards of size and weight. Her confirmation was near perfect and she resembled a Brindle Mastiff/BullMastiff cross to some degree. My father conferred with the Mastiff Kennel Club before introducing her to the Old English Mastiff Breed. After the fact a great degree of controversy developed. Mrs Moore, a later friend of my fathers and a DuPont, wrote a book on the Old English Breed. She later thought that the introduction of the Dogue of Bordeaux to Mastiff line actually improved the Breed.

An interesting side note was that she was an adult dogue and did not understand English. It took her several months to learn English command. She was a beautiful dog. We loved her.”

The second dog was Rugby de la Maison des Arbres by Dr. Philip Todd. Dr. Todd moved to Holland with his Dogues, and there were no other records of any in the country until 1969 when Steve and Wendy Norris, with the help of Dr. Todd, began to import Dogue de Bordeaux into the United States. It was in the 1980’s when the United States saw a small Dogue boom occur.  In 1986 Touchstone released Turner and Hooch, showing a big messy slobbering Dogue, which was believed to be a Bullmastiff or mutt.  In reality, it was the Dogue de Bordeaux. The Dogue was brought in to the country mainly by dog brokers, and many people received below par stock.  But thorough the years, the Americans have improved this stock, with selective and careful breeding, to have some of the finest Dogues in the world.

Today there are breeders of Dogue de Bordeaux that stretch form New Jersey to California, Texas to North Dakota.  One must be careful when purchasing a Dogue de Bordeaux, although they are considered a rare breed in the US, they carry a hefty price tag and are a favorite breed among the puppy millers.

Back to Home Page
↑